– My mission as a musician pursues a primordial idea: to exalt the concertante music of “our time”. – 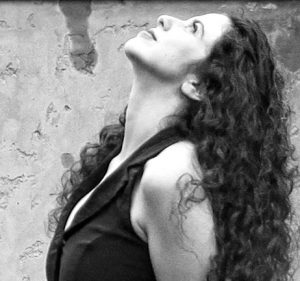 Anna Paolina Hasslacher is an internationally active French pianist of Mexican descent. She develops her musical activity as a soloist, a chamber musician and in various free improvisation projects.

Anna Paolina studied piano with Claudio Herrera, Laurent Cabasso and Michel Gaechter. Since her general musical studies she was attracted to innovative sonorities and instrumental techniques, and she decided to specialize in contemporary music, obtaining two Specialization Diplomas: in Piano and Chamber music (contemporary repertoire), in 2010 and 2012 at the Strasbourg Conservatory, France.
Later she continued her training at the Music Academy of the University of Basel, Switzerland, obtaining a Master’s Degree in Performance of Free Improvisation in 2016 under the tuition of Alfred Zimmerlin and Fred Frith.

As a soloist, Anna Paolina has been conducted by Jack Fortner and Juan Trigos, both renowned composers as well as conductors. And she has premiered important works, such as I. Fedele’s Études Boréales, H. Lachenmann’s Serynade, both in Mexico, or in France H. Quintanar’s Sonidos and the world premiere of  J. Muñoz Bravo’s Concerto pour piano et Orchestre d’Harmonie at the Cité de la Musique et de la Danse of Strasbourg.

In 2008 she cofounded CEGAC (Composers and Performers of Guanajuato A.C.), a Mexican association mainly aimed at the dissemination of contemporary music, the promotion of cultural heritage, as well as the exchange between artists. And in 2009 she founded with the flutist Olivia Abreu Ensemble Vertebræ, chamber music ensemble with variable instrumentation, dedicated to premiering and furthering contemporary innovative repertoire.

In the domain of improvisation, Anna Paolina is particularly interested in the exploration of sound and its metamorphoses through the use of extended and unconventional piano techniques. Since 2013 she is involved in various free improvisation projects, such as “… So klang, so far…”, “Universo”, and “Modulations of Feelings”, a musical and philosophical project in which she collaborated closely with her brother, the neurosurgeon Juan Francisco Hasslacher.

Her knowledge and experience in handling extended techniques has also led Anna Paolina to work with artists such as pianist Bertrand Chamayou, and danser Élodie Sicard, in the “Cage2” project, assisting in the preparation of pianos, and that is being on tour since 2019 in France.

Pedagogy is an integral part of Anna Paolina’s musical field of action, which is why she has developed international projects with Ensemble Vertebræ to present workshops and lectures in conservatories and music schools, as well as didactic concerts for children and young people. In 2016 Anna Paolina obtained the Music Teacher State Diploma in France.